Over the Teacup Spotlight Sunday- That Thing About Ted Lasso 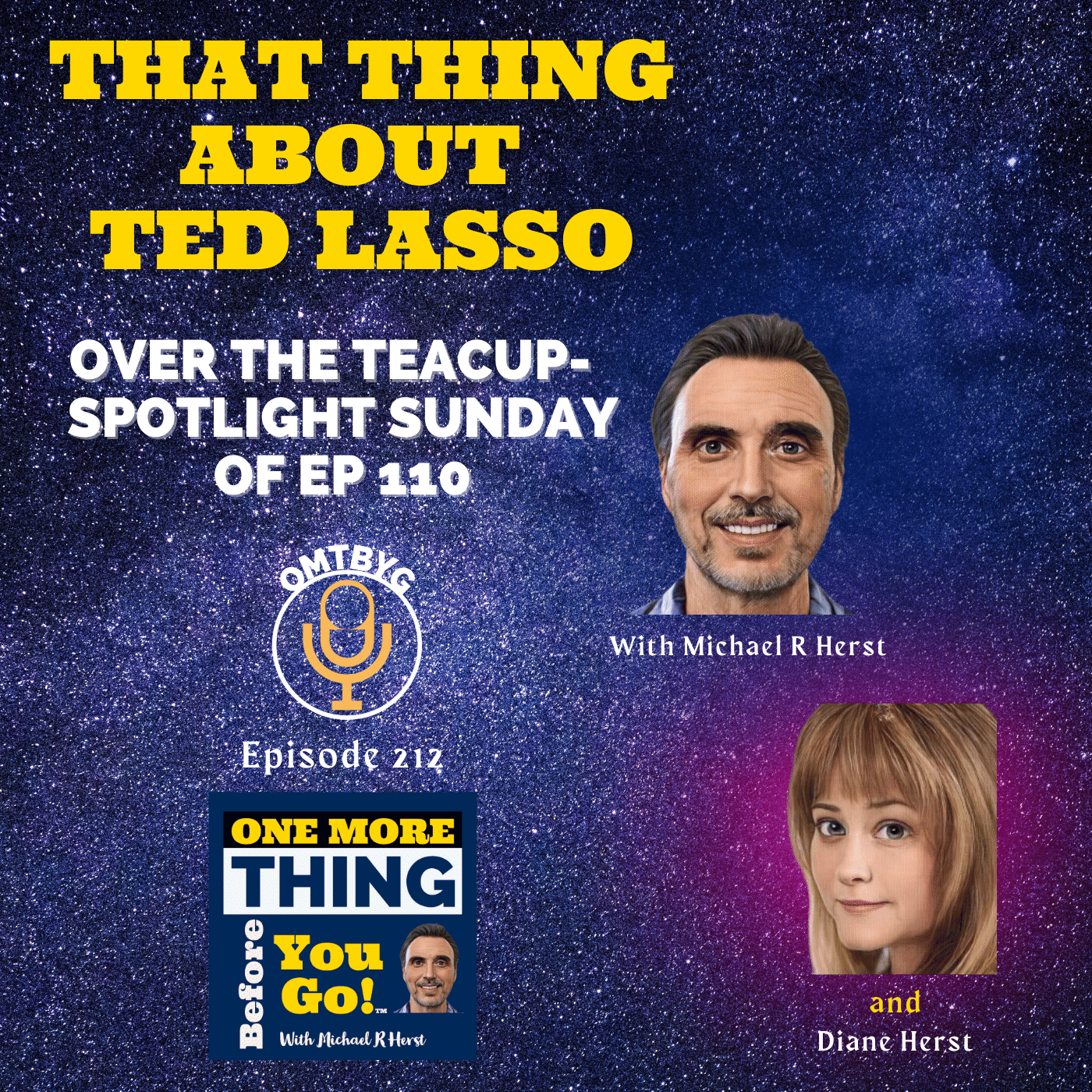 In this episode: Ted Lasso Season 3 will be premiering this fall possibly early October, and to prepare you for that debut, we are bringing you This Sunday Spotlight replay of Episode 110 “Over the Teacup with Michael & Diane: That Thing About Ted Lasso,” which aired on the 10th of September 2021. After listening to this episode please take the opportunity to go to Apple TV Plus and catch up on season one and two. So, sit back grab a cup of something and enjoy.

What happens when you put an American football coach from Kansas into the middle of an English football (Soccer) team? How about when you throw in an egomaniac, a silent bob type, a team owner that’s a smart, beautiful and strong woman, with a brilliant group of teammates? Why you get Ted Lasso! Diane and I share with you our favorite dramedy on Fridays.

Ted Lasso is an American comedy television series currently streaming as an original on Apple TV Plus. It was born from and developed by Jason Sudeikis, it’s also produced by Jason, Bill Lawrence, Brendan Hunt, and Joe Kelly. The series is based on a character of the same name that Sudeikis first portrayed in a series of promos for NBC Sports' coverage of the Premier League back in 2013. This weekly addiction stars Jason Sudeikis, as an American college football coach who led the Wichita State Shockers to a Division II National Collegiate Athletic Association championship. He is hired to coach an English soccer team in an attempt by its new owner (Rebecca Welton, played by Hannah Waddingham) a newly divorced woman, to spite her ex-husband. As you probably already figured out Ted is a downhome, kind-hearted American father and husband, who is seen as unsophisticated kind of “hillbilly” but is smarter than he looks. He loves to coach and cares more about people than winning.

This weekly gem runs about 30 minutes each Friday, and the first season of Ted Lasso, containing 10 episodes, premiered on Apple TV+ on August 14, 2020. It also stars Brandon Hunt, Steven Manus, Jeremy Swift, Phil Dunster, Brett Goldstein, Nick Mohammed, Juno Temple and a brilliant ensemble cast that brings you into their lives each and every week.

Just a quick reminder: over the next couple of weeks, I will be taking a break to spend some time with my family, refresh my soul, and concentrate on my health, so that I can come back with a new line up of fantastic guests, and great conversations to inspire, motivate, and educate you. During this time, we have selected some of our favorite episodes from this podcast and we know you're going to love these conversations that will touch your soul. So please enjoy these popular favorites, and I will see you starting September 14th with brand new episodes, brilliant guests and more of what you love about One More Thing Before You Go!